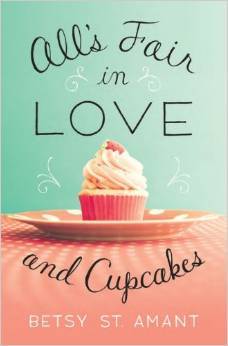 
At twenty-six years old, Kat is still living in the shadows of her family in Bayou Bend, Louisiana. Still working shifts at her Aunt Maggie s bakery. Still wondering what to do with her passion for baking and her business degree. And still single.But when Lucas Brannen, Kat s best friend, signs her up for a reality TV bake-off on Cupcake Combat, everything Kat ever wanted is suddenly dangled in front of her: creative license as a baker, recognition as a visionary . . . and a job at a famous bakery in New York.As the competition heats up, Lucas realizes he might have made a huge mistake. As much as he wants the best for Kat, the only thing he wants for himself her is suddenly in danger of slipping away.The bright lights of reality cooking wars and the chance at a successful career dazzle Kat s senses and Lucas is faced with a difficult choice: help his friend achieve her dreams . . . or sabotage her chances to keep her in Louisiana

I received a copy of this book from the publisher via Netgalley in exchange for an honest review. All opinions are my own. Find it on Barnes and Noble today.

My Thoughts:
'Cupcakes' is all about the romance. Two best friends, Kat and Lucas, have been in love with each other for awhile, but the other person doesn't know and they are too scared to share. Alternating viewpoints gives us, the reader, the chance to see the story from both sides.

Kat is a baker with no confidence in herself. She longs for her own bakery where she can serve up her 'weird' concoctions instead of the boring chocolate, vanilla, strawberry styles her aunt loves so much. Lucas has a lot going for him, except for a wife to help fix up the old farm he longs to buy. He has had his eyes set on Kat for far too long but doesn't know if she is ready for the next step. Signing Kat up for a cupcake competition, Lucas hopes Kat will gain confidence and grow some romantic feelings for him.

Because Kat and Lucas are BFFs, they are too afraid to mess up their friendship status and take that next step into romance. It created a LOT of tension, almost to the point of driving me bonkers. I am the epitome of middle child syndrome, and 'Cupcake' had almost too much conflict for me too handle. I pushed through to the end, but it sure was a struggle! Lucas and Kat just needed to TALK to each other, be honest, and TRUST each other. For having been friends for so long, it was amazing that this aspect was missing.

I would say that 90% of this book is spent inside the character's thoughts. So much of the book is introspection and self talk. I am amazed that there was any plot progression now that I think back on it! The alternating perspectives was a must then for the story.

The baking competition itself is fun and realistic. We are provided just enough that it remains in the background yet still seems real. Sometimes when books try to provide 'behind the scenes' settings it just becomes an over descriptive mess. St. Amant handled this really enjoyably.

My review doesn't sound overly positive, but 'Cupcakes' was an adorable book. Lucas and Kat's relationship was truly adorable, and once they started really talking I could see they were made for each other. A lot of back and forth, a lot of ups and downs, a lot of crazy events, 'Cupcakes' is perfect for the reader who loves romances mixed with baking. 3 stars from me.

PS: I had an unfinished eARC copy so I didn't get to see the included cupcake recipes! If you have a hardcopy of this title, let me know what you think of those recipes!