One Realm Beyond {Review} 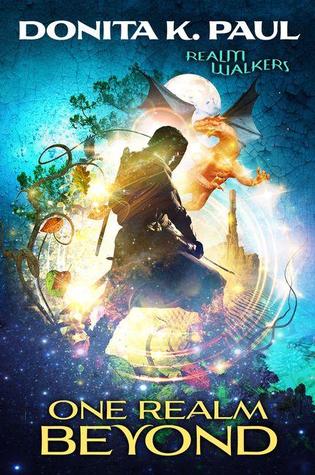 Cantor D Ahma waited his whole life for this day. Born with a gift to jump between worlds, the young realm walker is finally ready to leave his elderly mentor and accept his role as protector and defender of the realms. But mere hours after he steps through his first portal, Cantor discovers that his job will be more dangerous and difficult than he ever imagined. The realms are plagued with crime and cruelty, and even members of the once-noble Realm Walkers Guild can no longer be trusted. To make matters worse, his first assignment---finding a dragon to assist him on his quest---has led him to Bridger, who is clearly inept and won t leave him alone. With the help of his new friends Bixby and Dukmee, Cantor must uncover the secrets of the corrupt guild before they become too powerful to be stopped. But his skills aren t progressing as fast as he would like, and as he finds himself deeper and deeper in the guild s layers of deceit, Cantor struggles to determine where his true allegiance lies.

I received a copy from the publisher via BookLook in exchange for an honest review. All opinions are my own. Find it on Amazon for $7.99. (4/17/14)

My Thoughts:
Cantor D'Ahma is an inexperienced realm walker who is ready to set out on his own adventures. He is very much a by-the-book person and expects things to be done by a set formula. On Cantor's first adventure on his own, he runs into some interesting friends.

The first is Bridger, a mor dragon. Yes, a dragon! It appears that Paul loves to write about dragons and this work is no exception. The best part? The dragons are shape-shifters! Every realm walker looks for a dragon to be his constant, a sort of friend and companion to adventure with. Doctor Who, anyone?? Bridger is not the wise and noble dragon Cantor is hoping for. Bridger is clumsy, awkward, and difficult to understand sometimes. He was Paul's comedian of the story, but most of his jokes fell flat on me, or completely missed me :( Sometimes I felt like I hardly knew what was going on.

Then there is Bixby D'Mazeline. She is almost the complete opposite of Cantor in personality. I found her to be a confusing character. The author gave Bixby a voice that seemed young, inexperienced, and even slightly vain and more than girly. But in most of the large events of the book, Bixby would show up Cantor in skill and knowledge. She was a strange mixture of tough as nails and young and new. When we first meet her, Bixby seems unafraid of a fight, as the story continues, however, she appears as less athletic and more nervous about harming others. Still, Bixby is a solid female character who displays admirable qualities, bravery and confidence among them. Her dragon is Bridger's sister, Totobee-Rodolow, an experienced, sophisticated dragon who uses her shape-shifting powers to appear more beautiful....a useful, albeit vain character.

"One Realm Beyond" looks to be the first in a new trilogy. This first book is spent almost entirely on character building. We also learn a lot about being a realm walker and Primen, their god whom they represent on all the planes. I struggled with feeling like I was being left out of important details. In the book Cantor doesn't know much about the evil doings in the walker Council, and I feel just the same. The effect is a motley crew of characters somehow caught up in a political mess that they don't understand, and we don't understand. To make this book truly stellar for me, I would need those details. The book moved so slowly, right up until the end when it suddenly felt rushed and completely strange. I don't want to give to much away but it was odd.

Paul's latest work is a good, clean read, with an awkward rushed ending. And can I mention the cover??While I totally love it, it just doesn't match the book! Quirky characters and shape-shifting dragons bring it together just barely for this reader. Goodness knows I will still keep an eye out for book two, but without too many expectations. 3 stars and recommended for lovers of dragons, middle-grade-ish clean, appropriate reads.