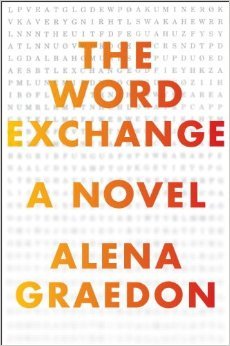 
A dystopian novel for the digital age, The Word Exchangeoffers an inventive, suspenseful, and decidedly original vision of the dangers of technology and of the enduring power of the printed word.

In the not-so-distant future, the forecasted “death of print” has become a reality. Bookstores, libraries, newspapers, and magazines are things of the past, and we spend our time glued to handheld devices called Memes that not only keep us in constant communication but also have become so intuitive that they hail us cabs before we leave our offices, order takeout at the first growl of a hungry stomach, and even create and sell language itself in a marketplace called the Word Exchange.
Anana Johnson works with her father, Doug, at the North American Dictionary of the English Language (NADEL), where Doug is hard at work on the last edition that will ever be printed. Doug is a staunchly anti-Meme, anti-tech intellectual who fondly remembers the days when people used email (everything now is text or videoconference) to communicate—or even actually spoke to one another, for that matter. One evening, Doug disappears from the NADEL offices, leaving a single written clue: ALICE. It’s a code word he devised to signal if he ever fell into harm’s way. And thus begins Anana’s journey down the proverbial rabbit hole . . .
Joined by Bart, her bookish NADEL colleague, Anana’s search for Doug will take her into dark  basements and subterranean passageways; the stacks and reading rooms of the Mercantile Library; and secret meetings of the underground resistance, the Diachronic Society. As Anana penetrates the mystery of her father’s disappearance and a pandemic of decaying language called “word flu” spreads, The Word Exchange becomes a cautionary tale that is at once a technological thriller and a meditation on the high cultural costs of digital technology.

I received a copy from the publisher via NetGalley in exchange for an honest review. All opinions are my own. Buy a copy for Word Exchange from Amazon for $11.84.

My Thoughts:
Let me say this first! Whew! I finished it! "Word Exchange" feels long and lengthy for many a good reason. It stands at 386 pages, and you are reading it on your Galaxy phone because your Kindle charging cord has fallen to pieces and you haven't ordered a new one....it makes it feel longer. As you may guess, "Word Exchange" is about words. The characters work for the Dictionary (one of the few remaining print versions) so of course they love words and their vocabulary and word choices are more intellectual. This often felt like wading through piles of words and verbiage, making for some slow reading.  But that is part of it, when the Word Flu starts spreading characters start experiencing aphasia and speaking gibberish. So of course we the reader are resigned to trying to interpret the gibberish as well. I fully understand and appreciate why the author did this, but it sure did cause some stumbling points for me, taking me out of the story briefly as I worked to understand.

Those two points made the book feel like quite the reading feat, but they weren't the only thing. I struggled to connect and care for the two main characters, Anana and Bart. She was brave but seemed shallow to me and ignorant. The story actually seemed to be less about her and more about the events. Anana turned into more of a narrator, a background noise. Bart was better, his obsession with Anana made him feel more real, more human. However, his part in events was miniscule to almost non-existent. If he hadn't been written in, the book would have stood on its own. Even Max, Anana's ex-boyfriend, while we didn't get to read his journal entries, played a larger role in the novel. Actually, reading his thoughts would have been intriguing!

What really kept me slogging through to the end was the realisticness. Graedon's world is a very realistic future for us. It is one in which society has become overly reliant on their Meme's (like advanced cell phones) and the printed word has almost ceased to exist. As a result words begin to lose their meaning, and helped along with a few technological bio-terrorists, a word flu spreads like wildfire. I can totally see our current society headed in this direction. A few times, I used my Kindle dictionary to look up the meaning of a word I just wasn't sure of, and I could see myself turning into Graedon's future humans. When I stumbled over some words while speaking, I was worried I was catching the word flu!! So I give major props to Graedon for creating a dystopian future that could very well be our own future, and doing it in such a way that gets the reader to stop and think about their own technology choices!

Overall, my feelings for this novel result in a big 'meh'. It was a tough, lengthy read for me, but it also got me thinking, and wondering, and actually worried! A book has to be pretty decent to stick in my mind like "Word Exchange" has. I could only recommend this work to folks who like lengthier, deeper reads about a dystopian future that could realistically become our very own future (not, for example like Hunger Games or Divergent). All this being said, I am rating "Word Exchange" with 3 stars. I'm glad I read it, but I won't be reading it again.