A Match of Wits {Review} 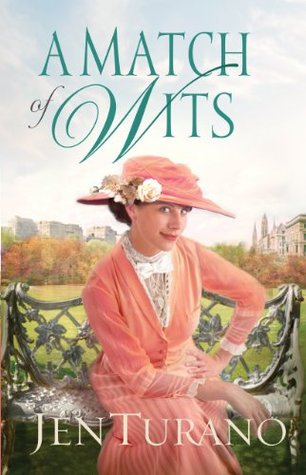 After his departure from New York two years ago to meet up with his almost-fiancee, Zayne Beckett is the last person Agatha Watson wanted to stumble upon in her travels as a reporter with the New York Tribune. Quite pathetically bedraggled, he clearly needs to be taken in hand and sent back East to his family. Although she no longer has feelings for him, Agatha realizes--by hook or by crook--she'll have to be the one to get the obstinate man home.
Zayne has no desire to be taken anywhere and is prepared to drag his heels all the way home . . . until he finds himself slipping back into the familiar banter of his former friendship with Agatha. Once they arrive in New York, Zayne realizes Agatha's determined nose for news has earned her a few enemies, and he hopes to repay her help with some help of his own. When she rebuffs all his attempts to prove himself a knight in shining armor, the lengths to which they'll go to win this battle of wills lead to some memorable antics.
Everyone else may think them a match, but nothing could be further from the truth--until Agatha finds herself in real trouble. Have these two stubborn, too-smart-for-their-own-good people been meant for each other all along?


I received a copy of this book from the publisher via Netgalley in exchange for an honest review. All opinions are my own. Buy a copy from Amazon today (7/6/14).

My Thoughts:
'A Match of Wits' is book four of the 'Ladies of Distinction' series by Jen Turano. While it could be read as a standalone, it is best read after the preceding books because previous events are repeatedly mentioned. After reading book three, 'A Talent for Trouble', I wasn't sure I wanted to read another book by Turano. Alas, I couldn't resist another try when I saw this title on Netgalley.

While I was on the fence about whether I wanted to read more of the series after the last book, 'Match of Wits' sealed the deal: Turano's characters are not for me. Most of my complaints are even similiar to my previous review.

Agatha, our main character, simply can't keep out of trouble. While perhaps endearing to some, I found it an overwhelming nuisance. Right off the bat, Agatha runs into her old friend and flame, Zayne, and decides that he needs to be brought home and cleaned up. Yet later in the novel, Agatha gets positively steamed when Zayne tries to force what he thinks is best on her. No spoilers, but I found it very hypocritical. With this instance and a few others, I came to feel that Agatha was really just self absorbed and highly emotional.

Zayne is treated like a bumbling idiot by just about every character in the book. I felt so bad for him, because while everyone else thought he was being rude and unkind, it felt like he was just trying to keep Agatha safe from her unending scrapes. The image portrayed by these characters(from this book and the previous book) are that men try to change women, and that women should be independent, tow-headed, and the center of the world. At one point Turano even mentioned that Zayne should grovel to win Agatha's heart! Perhaps some find weak-willed men attractive, but just not me.

The bare bones of the plot were intriguing. I liked the story itself, it was adventurous, fun, and yes, funny. Two of the secondary characters, Blackheart and Drusilla, I am sure we will be seeing more of them in future books. Their back stories sound unique and hopefully Drusilla will be differently from the previous characters.

I, however, won't be reading it. "A Match of Wits" just didn't satisfy. The characters grated on me and unfortunately distracted from the story. It was well written and funny, so if you don't mind demanding women and weak men in your romances, by all means check this one out. Or see my Goodreads shelf for Christian fiction or clean romances. I'm rating "A Match of Wits" with 1.5 stars out of a possible five.