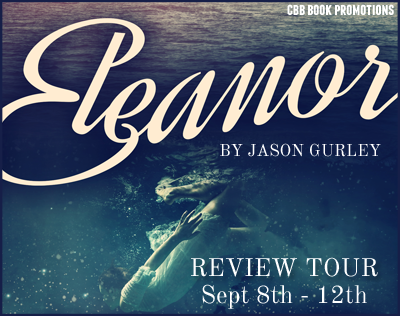 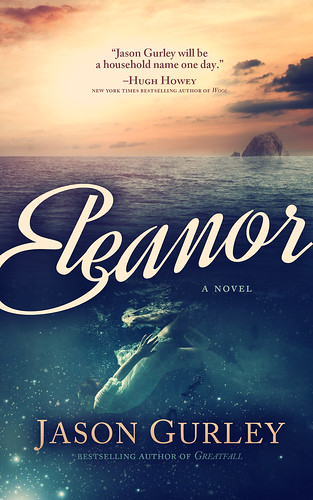 Time is a river. 1985. The death of Eleanor's twin sister tears her family apart. Her father blames her mother for the accident. When Eleanor's mother looks at her, she sees only the daughter she lost. Their wounded family crumbles under the weight of their shared grief.
1993. Eleanor is fourteen years old when it happens for the first time... when she walks through an ordinary door at school and finds herself in another world. It happens again and again, but it's only a curiosity until that day at the cliffs. The day when Eleanor dives... and something rips her out of time itself.
And on the other side, someone is waiting for her. 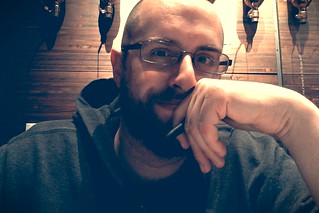 Jason Gurley is the author of the bestselling novel Greatfall as well as The Man Who Ended the World, the Movement trilogy and Eleanor, a novel thirteen years in the making. His short stories, including The Dark Age, The Caretaker, The Last Rail-Rider and others, appear in his collection Deep Breath Hold Tight: Stories About the End of Everything. He is work has appeared in a number of anthologies, among them David Gatewood's From the Indie Side and Synchronic and John Joseph Adams's Help Fund My Robot Army!!! & Other Improbable Crowdfunding Projects. Jason is a designer by trade, and has designed book covers for Amazon Publishing, Subterranean Press, Prime Books and many independent authors, among them bestsellers Hugh Howey, Matthew Mather, Russell Blake, Michael Bunker, Ernie Lindsey and others. Jason lives and writes in the Pacific Northwest.

My Thoughts:
Okay. This book is...this book is...well. It doesn't read strictly YA even though the main character is a teenager. And it is kind of a science fiction book, but it just doesn't feel like one. I am doing a spectacular job with this review so far, eh? But that is just the point, 'Eleanor' is unlike any book I have read before.

The first few chapters are intriguing, but normal. A literary tale of a mother's depression and the legacy she leaves for her daughter, who herself becomes a reluctant mother of twin girls. And then suddenly, and very much so without warning, the whole scope of the book changes. Suddenly this isn't just a normal, albeit depressing, literary read. Now we are traveling between strange worlds with young Eleanor, confused, powerless, and struggling to arrange live around this 'new normal'.
The last quarter of the book is where it all starts to come together. I found it touching, beautiful, trippy, strange, wonderful, and just so happy. I don't want to give away many details about this book, because with the way it just is....I'm not sure what a person might consider a spoiler.

Two things I didn't like: 1. Eleanor was super self centered. Sure, when life is suddenly spacey-wacey, timey-wimey you do tend to become a bit self focused. But reading through one of her tantrums and I just thought to myself 'What the crap is wrong with you, child?' I skimmed over some parts and tried to stick with her better qualities. 2. Some parts of the story, mostly the latter half, are quite trippy. Like, weird unexplained dream-like things are being described and my brain couldn't handle some of it. Parts here were also skimmed over for the sake of my sanity.

Overall, though, 'Eleanor' was worth the read. Every second, even the skimmed over seconds. Jason Gurley has created a new type of novel that blends realism with dream worlds, adding the perfect dash of crazy family, loyalty, and love. And the cover? Love. Read this one today so you can understand the perfect weirdness that Gurley has created. 5 Stars and recommended to those looking for something new, or for those looking for a good blending of literary and sci fi.
Giveaway:
Five $20 Amazon Gift Cards (INT)
a Rafflecopter giveaway