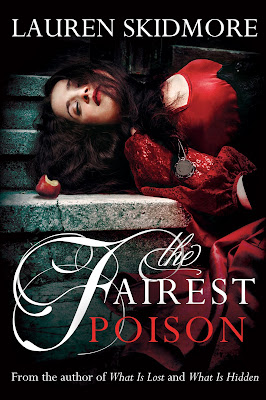 Princess Bianca returns to her court to find it poisoned from the inside out. Faced with mysterious sicknesses, power disputes, and whispers of impending death, Bianca turns to an unlikely ally—a former assassin—to find the antidote that will save her kingdom. But Bianca quickly realizes that she might not even be able to save her own life in this Snow White story.


My parents were sick.

That was the first news I received when I returned to the palace after nearly six months away. I was Venesia’s princess, and so its ambassador. I was happy to serve . . . but not if it meant coming home to this.

“What’s wrong?” I asked, shedding my cloak and shaking it out before handing it to a servant. It was still damp with seawater from the journey. It hadn’t exactly been a peaceful trip.

“Are they up to visitors now?”

The two handmaidens that had greeted me exchanged glances. “You should rest from your journey first, princess. It’s late, and the details can wait until the morning.”

I frowned. “No. You cannot welcome me back by saying my return may aid my parents’ recovery and then refuse to tell me what’s wrong.”

“We don’t want to worry you, princess,” the other one said, throwing a nervous glance at her companion. She’d been with the palace longer and knew I would not be easily dissuaded from getting what I wanted.

“Prince Aiden went to speak to the Guard about the successful capture of that Chameleon. He was eager to see the killer in person.”

I braced myself. Aiden was in for a surprise on that front. “Maybe I will go rest after all,” I said, brushing a dark curl behind my ear and adjusting the purple mask I wore across the upper half of my face. I would miss the freedom of not wearing my full Venesian mask while I was away from court. “But don’t think it’s because you dissuaded me from seeing the king and queen tonight. Surely, if they were seriously ill, they’d have ordered you to take me to them right away. I won’t disturb their sleep.”

“Of course, princess.” They both curtseyed.

“You’re dismissed,” I said quickly to my handmaidens. I didn’t need spectators for this.

They scurried away—though I’m sure to only just around the corner so they could eavesdrop—and I turned to face my elder brother. He came barreling down the dimly lit corridor, his half-cloak billowing out behind him. He wore the emerald green mask he favored when he was out of the palace so no one would bother him as the prince. The pure white masks of the royal family tend to stand out in a sea of blues and green.

“Where is he?” he demanded. The head guard and a young woman in a green mask were just a few steps behind him. Looks like we were going to have an audience after all.

I was tempted to play dumb but knew that would only make him even more upset. And he had good reason to be upset; I couldn’t deny him that.

“Please hear me out,” I began slowly, my voice even and calm.

“You set him free, didn’t you?” He shook his head in disbelief. “Bianca, he killed Evie’s father.” He gestured to the woman behind him, who shifted her weight from foot to foot uncomfortably, a medium-sized brown dog with a fluffy, curled tail at her heels. “He tried to kill me.”

“There is no excuse here! He killed and was willing to kill again. He stole masks and identities. He betrayed the trust of a kingdom who took him in. He is a criminal who needs to pay for his crimes.”

“He saved my life. I owe him,” I explained simply.

That made Aiden pause, but only for the length of a breath before retorting, “One good act does not make up for all the evil he’s done.”

“But it proves there is good in him.”

“Or he is just trying to save his own skin by having you in his debt.”

“He’s not as terrible as you think he is.”

“But you admit he is terrible.”

“Aiden.” I started to truly feel the late hour now and my shoulders drooped. “He deserves a fair trial at the very least.”

“I can’t give him a trial if he is mysteriously set free in the middle of the night.”

“I think I’m being understandably upset. I went from news of my baby sister returning home with the scum I’ve been hunting for the past three months—to finding out that the scum has vanished and has said sister to thank for it! With everything that’s been going on in court, and now with Mother and Father ill—”

“Do you know what’s wrong with them?” I interrupted, both wanting to know and hoping to change the subject. I’d bristled slightly at being called his “baby sister”—there were only two years between us, after all—but was willing to overlook it in the name of the greater good of the moment. His accusations weren’t untrue; he just didn’t know the Chameleon like I did.

I might have been part of the reason he’d been captured, but we had a history. And that history meant that I owed him his freedom.

It seemed Aiden was as tired of arguing as I was. He answered, “The doctors aren’t

sure. It’s not an illness they’re familiar with. Mother and Father are on bed rest now until a cure can be found. They can barely eat and are very weak, and they both have a pink rash all over their bodies. It happened so suddenly, but no one else in court has the same symptoms, so we don’t know where it came from.”

“How long have they been like this? Why did no one tell me?”

“They only just felt sick enough to admit it and seek a doctor, though Father mentioned to me he’d been feeling poorly for several days.”

I sighed. It was just like them to overlook any health problems until they got too serious to ignore. They didn’t want to appear weak in front of the kingdom, and to appear human was to appear weak. In the king’s eyes, at least.

“I’ll go see them first thing in the morning. We all need our rest.” I gave Aiden a meaningful look. “That means you as well.” I was sure his mask hid dark circles under his eyes, one benefit of our country’s tradition. I knew my brother, and he’d been pushing himself too hard. I’d gotten snippets of the unrest that had crept into our court from his letters while I was away, but it was another matter to see him in person.

From what I understood, the court was reluctant to accept him as their next ruler. He had no respect for tradition, they claimed. For generations, the royal family protected themselves behind pure white masks, fine clothes, and strict rules. Aiden wanted to make changes that gave him more personal freedom as well as control over the country.

“We’ll all of us go to sleep, and discuss things again after breakfast.”

“Fine,” he begrudged as he turned, offering his arm to the woman beside him, who looked as tired as I felt, plus awkward after witnessing a royal argument. Evie, he said her name was. He’d written about her. He had proposed marriage to her, and she’d said no.

I was very curious about her.

I smiled. “I missed you too.” My gaze shifted to Evie, and I opened my mouth to greet her properly.

“Let’s save introductions for a less unconventional time,” he interrupted before I could say anything. He reached for her hand, tucking it in the crook of his arm. “I’d rather your official meeting be a more pleasant one. Or at least one where we’re not arguing.”

She rolled her eyes at him but offered me a shy smile.

“If you insist,” I replied with a smile for her and a raised eyebrow for him. Its effect was somewhat lessened thanks to my mask, but he knew my expressions well enough to spot it.

He chuckled and shook his head with affection in his eyes. “Until tomorrow,” he said, and we parted ways.

The halls were dim and quiet, but I could have found my way to my chambers in the dark. I rarely left the palace growing up, and walking through these halls now felt like slipping into a warm bath. I loved the palace.

Servants had already brought my trunk to my parlor. Normally, I would need help dressing for bed, thanks to the complex finery of the clothing that comes with royalty, but since I was still dressed in a simple traveling dress, I didn’t bother ringing for a handmaiden.

I’d missed my rooms. It had been a long time since I’d been alone, and my rooms were the one place I was granted my privacy.

For six months, I’d been acting as ambassador to Nishima, a neighboring country we had strong ties with. That meant that for nearly six months, I’d been constantly surrounded by people—if not by the dignitaries I was there to see, then by my own guards who never left my side. Even on the journey home, when we’d been sidetracked by the hunt for the Chameleon, I’d never been left on my own.

But in my own palace, in my own rooms, I was alone. And I felt safe.

I fell asleep almost as soon as my head touched my pillow.

The next morning, I’d barely dressed before I heard insistent knocks at the doors to my suite. I knew it was Aiden even before my handmaiden opened the door to reveal him.

“They’ve gotten worse,” he interrupted me, his eyes grim. “Mother and Father. And another doctor, a specialist from Nishima, has examined them.”

He opened and closed his mouth several times, searching for the right words.

About the Author
Lauren Skidmore grew up in Kansas, with stints in Ohio and New York, and currently lives in Utah. She attended Brigham Young University where she earned a BA in English Teaching with an emphasis in Teaching English as a Second Language and Japanese. She then spent a year in Japan teaching and travelling. She hasn’t made it to Europe yet, but it’s on the list and has been to 30 states in the U.S. so far. When she’s not exploring new places, you can probably find her on the internet with fifteen windows open and looking at just one more thing before actually getting something done.
Author Links:

Email ThisBlogThis!Share to TwitterShare to FacebookShare to Pinterest
Labels: bookblast, fiction, giveaway, YA