Doctor Who: Touched by an Angel Review 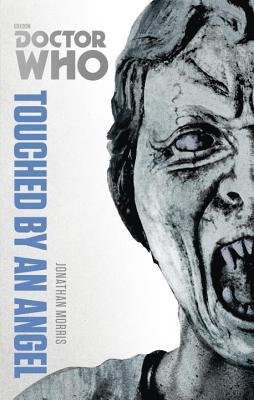 
'The past is like a foreign country. Nice to visit, but you really wouldn't want to live there.'
In 2003, Rebecca Whitaker died in a road accident. Her husband Mark is still grieving. He receives a battered envelope, posted eight years earlier, containing a set of instructions with a simple message: 'You can save her.'
As Mark is given the chance to save Rebecca, it's up to the Doctor, Amy and Rory to save the whole world. Because this time the Weeping Angels are using history itself as a weapon.
An adventure featuring the Eleventh Doctor, as played by Matt Smith, and his companions Amy and Rory

I received a copy of this book from the publisher via Netgalley in exchange for an honest review. All opinions are my own. Buy the Kindle edition for $9.43 today (5/2 /14)

My Thoughts:
If you don't know that I am obsessed with Doctor Who, we apparently aren't friends. And if you LOVE some Who like I do, than we are insta-friends. My name is Alyssa, nice to meet you! Previously, I have read two other Doctor Who books before, both featuring 10 and Donna. Perhaps it is the difference in Doctor, but "Touched by an Angel" was way less enjoyable to read.

First, it should be mentioned that one should only be reading this book if they are already fans of the show, which I would assume to be the case anyhow. All manner-isms of the Doctor, Amy, and Rory expect previous knowledge. Also relationships between the three aren't explained, and even the basic knowledge of Weeping Angels and who the Doctor IS are all assumed.

Along that same train of thought, much in this book isn't fully explained. I suppose that is the nature of Doctor Who. Some of the science has to be made up, some of the 'real' science goes over my head, and sometimes they blatantly gloss over things. Being a fan of DW calls for some suspension of belief at times, goes with the sci-fi name. While I can tolerate, and even love it in the show, I found it didn't translate as well into writing. I could picture the Doctor doing his quirky things like straightening his bow tie and brandishing his sonic, but they just didn't carry the same weight. Weeping Angels are also a lot less scary if you are only reading about them. I think DW is just made for its TV show format.

POSSIBLE SPOILERS IF YOU CONTINUE....

As for the actual story itself, it was a sad one with not a completely happy ending. I also found it a bit boring compared to most DW adventures. The story revolves around Mark who lost his wife Rebecca in a car crash. Weeping Angels send Mark back into his past where he believes he will be able to save Rebecca. We tag along as readers, getting glimpses into college life and hoping he doesn't create a paradox.

I found myself confused often, which I know happens a lot in DW, but this time it was specific to the writing. I never knew which Mark's perspective I was reading from, the Younger Mark, or the Original Mark. It often took a good bit of reading, and guessing, to discover who was who and what was going on.

The overarching idea that the Angels picked Mark to help them create a paradox to feed off of was also a bit of a moot point when you stop to ask 'Why him?' I guess we will never know, but logic does ask why the Angels wouldn't just randomly pick someone else and start again. Nothing is really stopping them from repeating this idea over and over again until they are all finally time locked.

Overall, this book made me realize that I really should just stick to DW television, no matter how bad I am craving some Tennant...er Who, in my life. I can only give it 2.5 stars out of a possible 5 stars. I found it bland, confusing, and lacking in actual Doctor. I'd recommend it to superfans only, and also those who are fans of the Weeping Angels.

Now off to watch 'The Family of Blood'!!