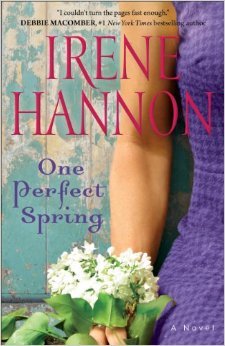 
Claire Summers is a determined, independent single mother who is doing her best to make lemonade out of the lemons life has handed her. Keith Watson is a results-oriented workaholic with no time for a social life. As the executive assistant to a local philanthropic businessman, he’s used to fielding requests for donations. But when a letter from Claire’s eleven-year-old daughter reaches his desk, everything changes. The girl isn’t asking for money, but for help finding the long-lost son of an elderly neighbor.As Keith digs reluctantly into this complicated assignment, he has no idea how intertwined his life and Claire’s will become–nor how one little girl’s kindhearted request will touch so many lives and reap so many blessings.Through compelling characters and surprising plot twists, Irene Hannon offers readers this tenderhearted story of family connections that demonstrates how life is like lilacs–the biggest blooms often come only after the harshest winters.

I received this review copy from the publisher in exchange for an honest review. All opinions are my own. Buy the paperback on Amazon for $10.82 today! (4/30/14)

My Thoughts:
Hannon told this story through four different perspectives: Keith, David, Marianna, and Claire. While this could be confusing, Hannon did a well enough job of indicating early on in each new section or chapter who's voice we were reading. The voices themselves were pretty similiar, so Hannon had to distinguish using clues to the character's background, other characters, or just plain saying their name.

Each character had their own story. Probably the least focused on was David, but I liked him! He was such a gentleman. David had hurts but he was trying to build bridges, make amends, and move on. The story revolving around him and his grown daughter were touching.

Claire was probably my least favorite character. I am sure it must hurt to have gone through a divorce and raise a child on your own. Claire seemed to be handling it well, but also be completely jaded by it. Some of Claire's thoughts made it sound like she had been rejected by a few men and not just one. I struggled with feeling like she was pretty melodramatic.

Keith's character was more enjoyable. I felt like the author put more time and effort into developing his character and story fully in this novel than any of the other characters. When we first meet him, Keith is a workaholic who loves what he does, but he has a meddling boss, David. Keith and Claire fall for each other slowly but surely, opening up as they learn to trust each other. And as he does, he starts appreciating life more than work, and love over all. His character ended up doing a subtle, but complete 180 degree turn. I didn't like the way his Big Event ended, it felt too 'easy' and slightly anticlimactic. That is all I want to say on that for fear of giving away spoilers.

Lastly, there was Marianna with the most emotional story. She had a history and depth unmatched by the other characters. She was kind and compassionate. Originally I thought Marianna was just going to be a background character, but her story become a focal point next to Keith's. And again, without giving away spoilers, I think it safe to say that her Story's End wasn't completely happy. At first I found it completely irritating that the author didn't give us a reason why she went the direction she did, but the more I thought about it, the more I found it to be true of life. Sometimes unhappy things happen and we don't get a reason why. I could appreciate that the book was realistic at least.

"One Perfect Spring" is classified as a Christian Romance. I really appreciated how the author portrayed the married couples: hot and steamy! Marriage can, and is, hot and enjoyable! Most people have this perception that once you get married the romance dies away, and it doesn't have too. Even just the small focuses that Hannon put on marriage was a win in my book. Please note that while I say 'hot and steamy' this book is completely appropriate and wouldn't make your grandmother blush. The 'Christian' bits felt rather like an afterthought. Like perhaps Hannon wrote the book, and once completed, went back and added some Christian influence here and there. It was not a main focus by any means. I would feel completely safe recommending this to non-Christian friends who enjoy clean romances.

Overall, I have to give "One Perfect Spring" three stars. I was happy with two of the characters, the brief portrayals of marriage, couples with respectful relationships, and the realisticness of the stories. But other parts I found a bit dull or forgettable. Having four perspectives is hard to keep up with, and while Hannon did a decent job, it was still a bit much. I was also hoping for more of a Christian voice throughout the novel. Like I mentioned before, I could easily recommend it to non-Christian and Christian friends alike who might be looking for a light spring, early summer read.