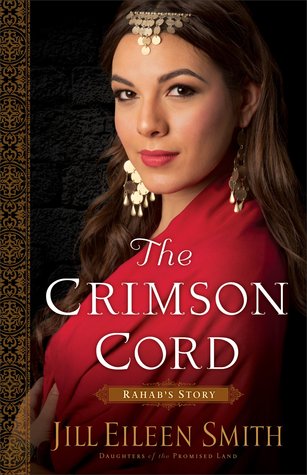 Wife to a gambler who took one too many risks, Rahab finds herself sold as a slave to cover her husband's debt. Forced into prostitution by Dabir, counselor to the Syrian king, Rahab despairs of ever regaining her freedom and her self-respect. But when Israelite spies enter Jericho and come to lodge at her house, Rahab sees a glimmer of hope and the opportunity of a lifetime. In one risky moment, she takes a leap of faith, puts her trust in a God she does not know, and vows to protect the spies from the authorities. When the armies of Israel arrive weeks later, Rahab hopes they will keep their promise, but she has no idea what kind of challenges await her outside Jericho's walls--or if she will ever know the meaning of love.

My Thoughts:
Like!! And that is all you really need to know. But for the sake of this being a book review blog and all, I shall attempt to elaborate.

I have heard Rahab's story many times, the story of a prostitute who saves two Israelites and in turn is saved from certain doom. Later in the book of Matthew, we find that she is a part of King David's lineage, and thus in turn Jesus' as well. But the story always revolves around the fall of Jericho or Joshua who trusted the Lord. If anything much is made of Rahab's life as a prostitute and how God used her to be a part of Jesus' life. I have never before read, or even thought of, what Rahab's life was like, how she became a prostitute and why she made the decision to believe in God.

'Crimson Cord' is broken up into three distinct parts. Part One is Rahab's life before the arrival of the Israelites, Salmon and Mishael. I found it quite shocking, the way women had no say in their fate, in their own lives. But Smith wrote only true to the time and didn't try to make an issue of it or fight it. During this period of time, women simply accepted the way they were treated. It had never been any different. So while it was sad to read some of the events, I appreciated Smith's research of the character and the time period. So Part One tells us how Rahab's life falls apart and she is old to Dabir as his mistress. He quickly forces her to sell her body to earn her keep.

Part Two introduces us to Salmon, our male hero, and his friend Mishael. They are the two Israelites who get inside Jericho's walls to spy on the city. It now splits narrators between Rahab and Salmon. This part moved a little fast for me because it covered so much ground in a short amount of pages. We follow Salmon and Joshua as they lead the Israelites into battle, slaughter really, of Jericho. Rahab fights with her family to get them all to trust her, but in the end they are saved just as they were promised.

Part Three picks up right after the destruction of Jericho. I like to call it 'The Redemption'. This is where Smith truly packs in all the feels. Rahab is dealing with the sorrow of her lost city, everything she has ever known. Her family abandons her and she is left with a new people who's ways are wildly different than anything she has ever known. But Rahab wants to fit in, wants to belong, but who would ever befriend or trust a prostitute. Even knowing ahead of time how the story would turn out, it was beautiful to see God at work healing and redeeming Rahab's story.

This story will instill faith and wonder to all those who read it. It is beautifully researched, well thought out, and just plain awesome. If you've never pondered Rahab's story before, start here and find the wonder. 5 stars from me and I am now highly tempted to read more of Smith's work. Pick this one up is you want a glimpse of: -Rahab's life -God's redeeming touch -a peek into ancient Israel that stays true to the harsh reality -or a beautiful story.