Gosh golly, where did the time go??All I can really remember about Februrary is my daughter's obsession with Batman and Robin. She is, of course, Robin ;) I've been designated Batman, but just today she upgraded me to Batgirl. Daddy was just 'football' until a few days ago when he became 'ManBat', which YES is a real character. And because you are so gosh darned lucky: 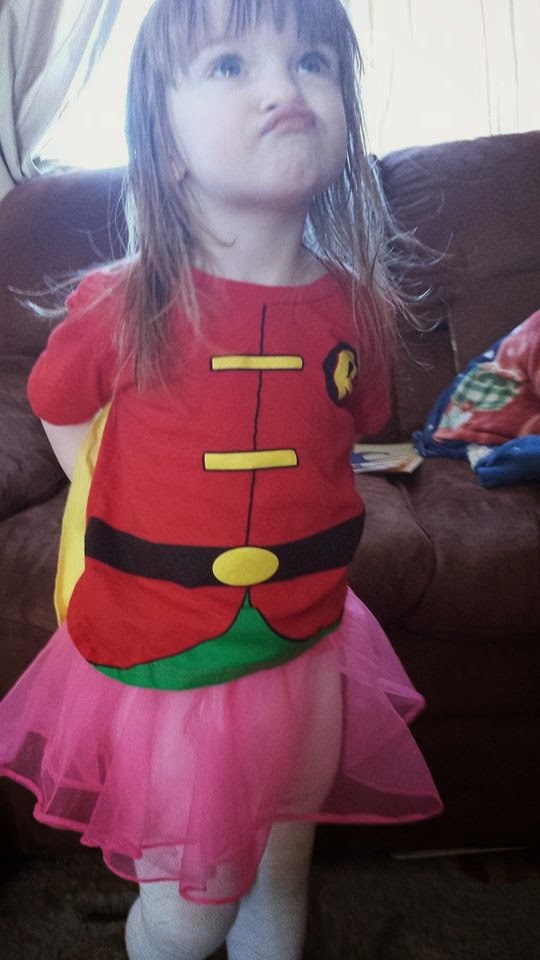 The family and I went to an indoor playground for the very first time. And oh my, it felt like a prison for naughty children. Am I really that overprotective of a mother? Or do I just want the big kids to not pelt my child with plastic balls??

Hubby and I went on an overnight in Minneapolis. We stayed at the trendy W Hotel in the Foshay Tower. It probably would have been a blast....minus all the drunk people. And the fact that the floor smelled like cannabis. And we had a wind chill advisory and husband and I walked. Everywhere. However, I ate at the BEST authentic Mexican place (Barrio) and discovered the cutest little bakery (Angel Food). We also got to see Pippin (Hubby's first musical!!), eat the world's BEST cheese curds with triple berry ketchup, and checked out the Space exhibit at the Science Museum.

Other than that, I've been working on my Usborne business, reading, and playing Lego Batman on the Xbox. #addicted

In February I read 10 books. Four counted towards my Flights of Fantasy challenge. Four met my Library 2015 Challenge. And YES, I'm STILL behind on reviews :) But look! Three are linked here:

4 Stars:
This Shattered World by Amie Kaufman & Meagan Spooner (audio)
How Not to Fall in Love by Lisa Brown Roberts
Return to Exile by Lynne Gentry

3.5 Stars:
The Healer of Carthage by Lynne Gentry
Gathering Frost by Kaitlyn Davis

As you will probably notice :/ It was a review heavy month! I packed on the 'need to reads' and tried to catch up on reviews from January reads. I think I am only behind on three reviews. But then I am finishing another book tonight...and I have one due Tuesday...and Thursday....it never ends! :D

Reviews:
Defenseless 4 stars
Stitching Snow 5 stars
Paper or Plastic 4 stars (giveaway still open!)
How Not to Fall in Love 4 stars
Return to Exile 4 stars
A Thousand Pieces of You 5 stars
Gathering Frost 3.5 stars
Crimson Cord 5 stars
Both of Me 2 stars

Stargate SG-1 is still happening. It is harder to watch regularly with hubby's schedule.

SIL and I watched 'Ella Enchanted' (much unneeded CG and laughable costumes kept us giggling). And I finally made her watch 'Mean Girls'

I've been too busy with Lego Batman to watch much else :DD

I thought about eating healthier desserts but than THIS. Although I did actually eat this cookie dough dip and it was amazeballs.

I'm thinking about making a toddler bucket list with some of these activities and kiddo spots around MN.

And then I perused some of these after I felt bad about posting so many reviews. We shall see if anything comes of it in March!


This was my February: a whirlwind! Where did the time go?? How was your month?