What I lived in the month of October? DISEASE. I was completely wiped out of commission for two full weeks. The only good part about this was that it fell right after Baby Girl's birthday party and I was 95% better before my big murder mystery party. Apparently being pregnant and having a cold is a bad combo because it takes forever to get better with your lungs compressed.


It was still a fun month. We had two weddings, both of which Baby Girl attended and totally had a blast. I had some great pasta and some great cake. Can't complain there. 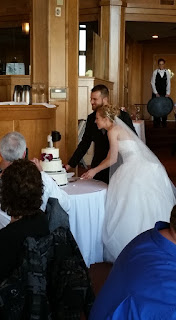 We also made it to the Apple Orchard and bought two dozen apple donuts, that yes, without a doubt, were gone within the week. And my husband doubts me. Pff. I still think we should have gotten a third box....

Then of course Baby Girl turned three!! We kept the party to just family (and well, the neighbors) this year and it was still a packed house. Baby Girl wanted a princess themed party and a Frozen cake of course. I love letting her pick things like this because she totally gets more into it. She was such a doll that day too, so excited and thankful for everything!

And then the moment I had been planning/dreading/waiting for since August: the Big Murder Mystery Party. Oh the stress people. My friend talked me into hosting it and then also talked me into WRITING IT! People, I've been to one murdery mystery party....six years ago! I was totally out of my league. What if I made it to vague? What if it was too easy?? What if people hated it?! BUT luckily, it turned out to be a smashing success! I'll share a pic of me and hubby here, but if I go any further into details, I'll need a new blog post! 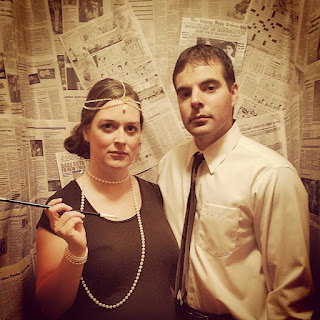 Me trying to be serious while my bestie made faces at me....
I'm Zelda and he is F.Scott

And because I am on a picture spree, here is Baby Girl on Halloween: 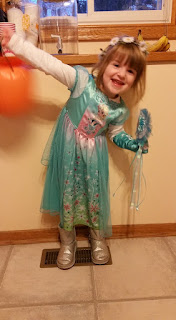 I read TWELVE books in September. How did I manage that?! I finished three audiobooks. Four books count toward my Flights of Fantasy Challenge. Two reads count for my Library Challenge. I also had one re-read so: go me!

3 Stars:
Off the Page by Jodi Picoult and Samantha Van Leer

I managed 17 posts in October! It helps that I am hosting a link up with a blogger friend :) The link up is posted every Saturday for the month, but feel free to link up during the week as well!

People. Did I watch anything?! I may have watched an episode or two of the Doctor. But otherwise I am pretty sure all the watching I did involved Youtube playdough videos, Daniel Tiger's Neighborhood, Cinderella, or My Little Pony. I may have to change this category name to: "What my Daughter Watched"

Murder mystery party stuff!! Including decorations: THIS I used and THIS was good inspiration. But also makeup and hair ideas.