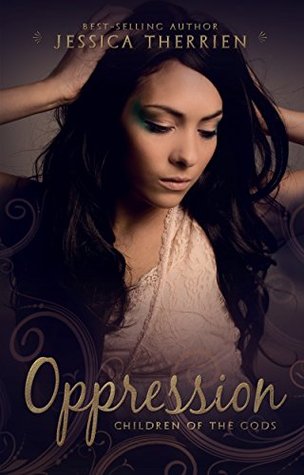 Oppression by Jessica Therrien
Children of the Gods #1
Publisher: Acorn Publishing
Publishing Date: September 2, 2015
Goodreads Summary:
Elyse knows what it means to keep a secret. She's been keeping secrets her whole life. Two, actually. First, that she ages five times slower than average people, so that while she looks eighteen years old, she's closer to eighty. Second, that her blood has a mysterious power to heal. For Elyse, these things don't make her special. They make life dangerous. After the death of her parents, she's been careful to keep her secret as closely guarded as possible. Now, only one other person in the world knows about her age and ability. Or so she thinks. Elyse is not the only one keeping secrets. There are others like her all over the world, descendants of the very people the Greeks considered gods. She is one of them, and they have been waiting for her for a long time. Some are waiting for her to put an end to centuries of traditions that have oppressed their people under the guise of safeguarding them. Others are determined to keep her from doing just that. But for Elyse, the game is just beginning - and she's not entirely willing to play by their rules.

Books two and three in this series:
Uprising│Redemption

About the Author
Jessica Therrien is the author of the young adult paranormal fiction series Children of the Gods. Book one in the series, Oppression, became a Barnes & Noble best-seller shortly after its release in February of 2012.

Aside from her Children of the Gods series, Jessica’s work can also be found in a published collection of flash fiction stories called Campaigner Challenges 2011. Out of over 350 submissions her story, The Soulless, won first place for people’s choice and fourth place in the judging round of Rachael Harrie’s Writing Campaign Challenge. Her story, Saved, is also available as part of the anthology.
Jessica spent most of her life in the small town of Chilcoot, California, high up in the Sierra Nevada Mountains. In this town of nearly 100 residents, with no street lights or grocery stores, there was little to do but find ways to be creative. Her mother, the local English teacher, inspired her to do all things artistic, and ultimately instilled in her a love for language.

Jessica currently lives in Irvine with her husband and two sons. She is planning a re-release of her series through Acorn Publishing in September of 2015. The re-release will include the third and final book in her Children of the Gods series as well as a bonus chapter in the back of Oppression.

Author Links:
Website│Goodreads│Twitter│Facebook
************************************************
My Thoughts:
I'm so glad this book is getting a republish and tour. This book, 'Oppression', is actually a reread for me. I read it for the first time in 2012 enjoying it and giving it 4 stars. I had fully intended on continuing with the series, but it was just one of those things I never got around too. When I saw this on tour, I signed up immediately knowing it would be the kick in the pants I would need to read the whole trilogy.

'Oppression' is very much in the vein of the Percy Jackson series. Elyse discovers she is a Descendant, a child of a Greek 'god'. But instead of being actual gods, the Ancient Greeks were real humans with genetic abnormalities. These abnormalities are being passed down through the generations, but are now being kept secret and separate from the human population. However, once this is established, the Greek mythology bit falls to the background. Instead it is more a story about Elyse, a prophecy, and a controlling group named The Council.

In my reread, I still appreciated how the prophecy was portrayed. Often in prophecy books, the main character tries to fight the prophecy, change it, alter it, ignore it yada yada yada. Here Elyse is shocked to find out the Descendant community is relying on her, but knows there isn't much she can do about it. A prophecy will come about no matter the choices she makes. I can imagine some readers may be frustrated by Elyse and her choices, but I found it to be refreshing. A prophecy should be unchangeable.

The romance is fast and heavy. William is completely adorable! He is strong, supportive, and ready for a wild ride with Elyse by his side. There is a 'meant to be together' element that I hope doesn't turn anyone off. William is the best friend, the one who shows Elyse the ropes and introduces her to this new life. Without him I think we would miss a lot of the great world building we get to experience.

At the end, you will be left with so many questions! How will Elyse be the one to fulfill the prophecy? When will she start using her left side? Will we see Kara again?? Make sure you have book two ready and waiting as soon as you are done with book one! Keeping my rating at 4 stars. I would recommend this to anyone who enjoys a touch of Greek, mixed with fantastical powers romance and a bunch of prophecy!