September was a fun month! We got back in the groove and yet Baby Girl was throwing us curve balls left and right. First she had me worrying because she was being too clingy, and now I'm worried she's turning into a hyper brat when we go out. Potty training has been going very well with just the random accident here or there. Baby Girl still isn't 100% independent in this region, but being out of diapers is so exciting! We also started up our ECFE (Early Childhood Family Education...which is apparently unique to MN, but totally rocks!) class and Baby Girl and I are both loving it.

FOOTBALL STARTED!! YAHOO!! ...and also my fantasy team. But we won't talk about that.......nor will I ever forgive myself for drafting Tony Romo.

Then there were some other biggies, like finding out the gender of Baby #2 and having a bit of 'Babycation' in Del Ray Beach, FL :) Del Ray was just so perfect. Hot, steamy weather but with the perfect pool. We stayed at a Marriott which is like....suuuper nice, but of course expensive. Hubby and I also attended a marriage conference that was so refreshing. Let me also attest to the fact that FL OJ is best. 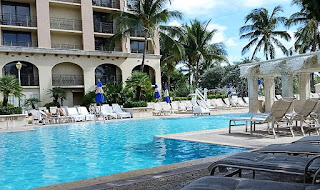 I read seven books in September. One audiobook. ZERO books count toward my Flights of Fantasy Challenge. TWO reads count for my Library Challenge. I know I read less this month because I was slogging through a nonfiction book that wasn't bad but that I just wasn't connecting with. Overall, my books were so middle of the road. Nothing was truly 'awesome'. I think the book that has stuck with me the most would be The Finishing School.

4 Stars:
The Finishing School by Valerie Woerner
The Winner's Crime by Marie Rutkoski
Girl Meets Change by Kristen Strong
All Dressed Up in Love by Ruth Logan Herne

3 Stars:
The Headmistress of Rosemere by Sarah E Ladd
A Glorious Dark by A.J. Swoboda
A June Bride by Marybeth Whalen (audio)

I managed 10 posts in September! And on a somewhat more consistent blogging schedule too! I have my moments :)

Doctor Who. And that is all. Series 7 now ya'll. Time to get used to Clara. Again.

Not much to share here, wah wah. I've been actually going through a few boards and deleting pins that I know I will never need/use.

I started a 'secret' board for Baby Girl's 3rd birthday party, so can't share that :) But I have also found a few Christmas and Autumn pins to love. Such as THIS, THIS, THIS, and THIS.