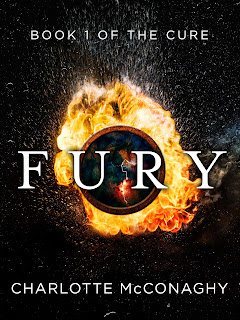 In the tradition of Divergent comes a novel about a world where negative emotions are stolen ... and only those with fury can stand up and fight.

Eighteen-year-old Josephine Luquet wakes naked and covered in blood that is not hers on the same day every year—when the blood moon is full. Josi has not responded to the "Cure"—an immunization against anger mandated by the government—and believes herself to be a threat to others.

Then she meets Luke. Luke has had the Cure but seems different to the other "drones"—and he's dead set on helping Josi discover the truth about herself before the next blood moon.

But time is running out. Is Luke willing to risk his life to be near her? Does he truly understand what violence she is capable of?

Raw and full of passion, Fury is a story of love in a dystopian world, and how much we are willing to forgive in the struggle to remember our humanity.

Charlotte started writing her children’s fantasy series ‘The Strangers of Paragor’ as a teenager and has since gone on to publish five novels. After a Masters degree in Screenwriting she wrote ‘Avery’, the first in her adult fantasy series ‘The Chronicles of Kaya’, published by Random House. She now lives in Sydney, Australia, and has just released a new dystopian sci-fi novel called ‘Fury – Book One of The Cure’, published by Momentum.

My Thoughts:
This book has very little in common with Divergent. Even the description throws out the 'Divergent' grabbing title. But "Fury" is it's own world. And it is an attention-grabbing, fascinating, dark, romantic, non-stop adventure of it's own.

We initially meet Josephine as she is approaching another yearly 'change'. All we know is that she claims to lose herself and kill people when it happens. We then travel back with Josephine as she tells her story: her history and meeting, and falling for, Luke. I loved this format, it created awesome suspense that wanted me to keep reading, to get back into the 'past' and find out more about Jo and Luke. Why was she now in an asylum? What had happened to her? What were these changes? What is Luke up to?? McConaghy did a superb job of drawing us in, giving us just a enough detail to want more.

'Fury' had a pretty strong love story. Josephine and Luke, almost complete opposites. For one of them, it is almost 'insta-love'ish. We witness Luke taking bold steps to become apart of Jo's life in ways that seem contrary to his job and nature. We root for him and yet hold our breath at the same time. Jo on the other hand warms up to Luke much more slowly. The book becomes not just a story to discovering who, or what, she is, but also a journey of Jo learning to trust and open her heart to love. Ack! Wonderful!

I have to recommend the book to more mature audiences however. There was swearing, non-graphic sex, and violence. I liked that McConaghy could write this story with such class, because while there was violence, I didn't find it too 'gory'. I have mentioned previously that I am a sensitive reader. Things I read, and even watch, affect me and my wild imagination. But I was able to read 'Fury' and fully enjoy it without being affected. So to my other sensitive readers out there, take this all with a grain of salt.

'Fury' is a fascinating dystopian love story with plenty of twists and turns I liked it better than Divergent, which felt much too grand. Perhaps I am viewing it from the wrong end of the scope, as one who finished that series and didn't like it. But as I mentioned before, 'Fury' is it's own beast. McConaghy tells her story and it is a strong, romantic, non-stop experience. I am SO looking forward to book two! I am rating 'Fury' with 4.5 stars and would really recommend you add this book to your summer reading list immediately!