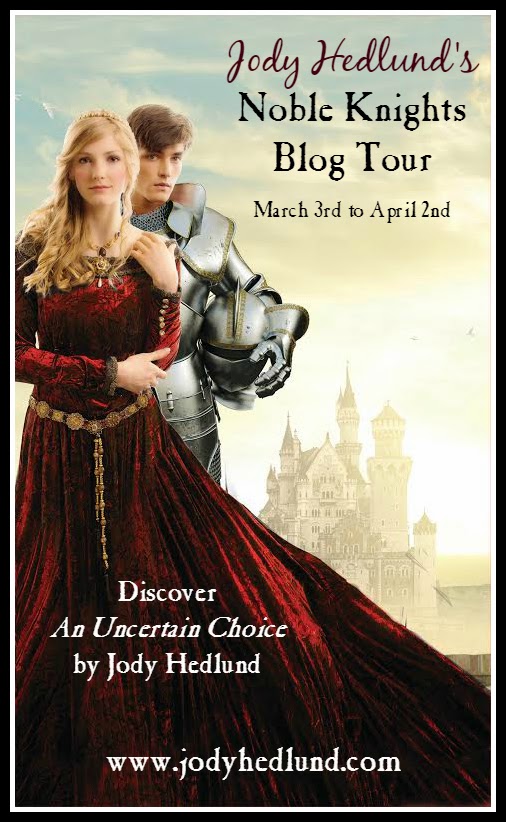 I wrote my review and conducted an interview with Jody Hedlund and her debut YA novel, An Uncertain Choice. Our main character, Lady Rosemarie is faced with a tough choice: either marry by the end of the month or enter the convent. Of course there is a whole lot of other story going on, the best, for me, being Rosemarie's choice of suitor: either Sir Bennet, Sir Collin, or Sir Derrick. Today I am introducing Sir Derrick. Stick around and I just may tell you how to win an autographed copy of the book. Also, be sure to check out Jody's blog tour page for all the stops and more chances to win! SIR DERRICK
Physical Characteristics:
-Straight, sandy blonde hair
-Gray eyes with a scar in the outer corner
-Noble, regal
-Self-deprecating. While not an outer appearance, he does bear it in his face, actions, and the way he carries himself

Personality:
Sir Derrick is an impatient man with a sad story. He is a knight without his own land which makes him appreciate the poor and downtrodden more so than the others. I think of him as a 'quiet extrovert', always with others, helping, talking, playing chess, but not really a part of the 'scene'. Always brewing, Sir Derrick speaks his mind and can be a bit rash, but typically thinks and acts most intelligently. He is an incredible jouster and easily attracts adorable dogs. Who doesn't like that??

Strengths:
Sir Derrick's biggest strength would have to be his ease with dogs and children. He doesn't shirk away from the weak or less fortunate, but rather lends a hand wherever possible. If it is a deep conversation or a long game of chess by the fire that you are looking for, Sir Derrick is your man.

Weaknesses:
However, if you are looking for riches and land, Sir Derrick has little to none of that. He is still trying to overcome his past and thus, has little time or use for romance. Sir Derrick can be impatient and rash, and frankly, a bit judgemental. Some may call it a bit 'emotional', Sir Derrick needs a lady who can meet his high standards and is unafraid to get her hands dirty. 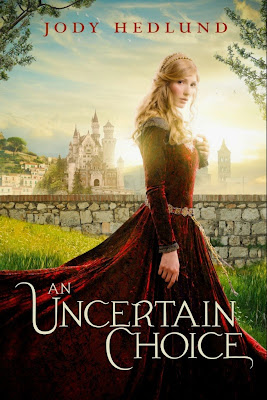 An Uncertain Choice by Jody Hedlund
Due to her parents' promise at her birth, Lady Rosemarie has been prepared to become a nun on the day she turns eighteen. Then, a month before her birthday, a friend of her father's enters the kingdom and proclaims her parents' will left a second choice. If Rosemarie can marry before the eve of her eighteenth year, she will be exempt from the ancient vow.
Before long, Rosemarie is presented with the three most handsome and brave knights in the land. But when the competition for her heart seemingly results in a knight playing foul, she begins to wonder if the cloister is the best place after all. If only one of the knights the one who appears the most guilty had not already captured her heart.

Jody Hedlund is the bestselling author of seven novels, including Captured By Love, Rebellious Heart, and A Noble Groom, winner of the 2014 Carol Award and INSPYs Award. She received a bachelor’s from Taylor University and a master’s from University of Wisconsin, both in social work. Currently she makes her home in Midland, Michigan, with her husband and five busy children.
Want to know what choice Lady Rosemarie makes? Enter to win an autographed copy of An Uncertain Choice here!
a Rafflecopter giveaway