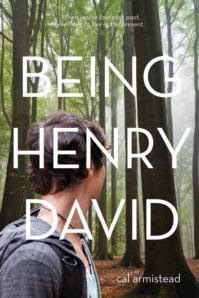 
Seventeen-year-old "Hank" has found himself at Penn Station in New York City with no memory of anything --who he is, where he came from, why he's running away. His only possession is a worn copy of Walden, by Henry David Thoreau. And so he becomes Henry David-or "Hank" and takes first to the streets, and then to the only destination he can think of--Walden Pond in Concord, Massachusetts. Cal Armistead's remarkable debut novel is about a teen in search of himself. Hank begins to piece together recollections from his past. The only way Hank can discover his present is to face up to the realities of his grievous memories. He must come to terms with the tragedy of his past, to stop running, and to find his way home

I received this book from ARCycling! It is currently being offered for Kindle $10.49.

My thoughts:
Hank wakes up in a train station with no memory of who he is. All he has is a copy of Walden by Thoreau. After a run in with some bad people, he sets out for Concord, MA, home of Walden Pond. Hank hopes to discover clues to who he is when he arrives. Soon he meets new friends, and a girl, and suddenly isn't so sure he wants to get his old life back anymore. As pieces slowly come back to Hank about his former, real life he is faced with the decision: run away or face the facts?

There is a lot I enjoyed with this novel. While thinking through this review, I kept saying two phrases: "normal" and "real life". Don't be annoyed if I over use them here :))

First, being apart of the amnesia experience with Hank is exciting. We as the reader also don't know anything about him. Is he bad? Did he hurt someone? What happened? I liked the way Armistead wrote through this, making us wonder. Should we like him, or hate him? Later Hank's discovery of who he really is felt normal and very real. The experience didn't feel forced or coerced, and most importantly, didn't feel overly dramatic. Too many times in amnesia story type books the MC discovers their past finally and they freak out. I am pulled into the drama as well, but often wonder later, "Like, that was it?? That's what they were so worried about?" In Being Henry David I didn't have to worry about that drama and it was SO refreshing.

Also refreshing, and strange for YA these days, was the lack of love interest. I guess 'lack' is the wrong word, there WAS an attraction interest, but it was not the main focus of the book. It remained in the background and was just prominent enough to give Hank something worth caring for in his new life. But his attractions for the girl, Hailey, were again, natural and normal, not gripping and fanatical found in recent YA.

My ARC copy has 308 pages and Goodreads says 320 so I would love to get my hands on a hard copy to compare! Perhaps the hard copy deals with one of my issues: being unhappy with the ending! I mean it was a good ending, but there wasn't enough answered for me. I felt like I was being lead on a journey of self-discovery with this kid, I should at least get to know what happens in the end right?

Even though this is my biggest dislike, I still get why Armistead does it. Being Henry David is a short book, but is as long as it needs to be. She kept it to real life, and in real life, we don't always get all the answers. There were many tangent stories that other authors may have felt the need to address. For example, what becomes of Hailey or Thomas' backstory. These are stories we will never get to experience (GRR), but like real life, we only get to experience our own stories. And here 'our' story is Hank's story (sigh. fine.)

The other thing I didn't care for was Thoreau himself. From Goodreads, it looks like a lot of people pick up this book because it might include Thoreau or be a Walden-esque story. I had no clue about any of that. I hadn't read the description and don't automatically equate the name Henry David to Thoreau. Sorry literary world. So I could have done without the heavy Walden quotes and creepy Thoreau ghost. It was a nice story prop to provide Hank with a name to use and place to go, but beyond that meh. Again, sorry literary world!!

If you check out my new ratings page you can see a glimpse of how I like to rate my books. This book averaged 3.2 and I had rated it as a 3 star on Goodreads. I still would recommend it to contemporary readers and writers for good pointers on sticking to real life.

Email ThisBlogThis!Share to TwitterShare to FacebookShare to Pinterest
Labels: 3 stars, review, YA