Welcome to my stop on The Exemus tour, hosted by CBB Book Promotions!
Today I have a review and a giveaway.
Be sure to check out all the tour stops. 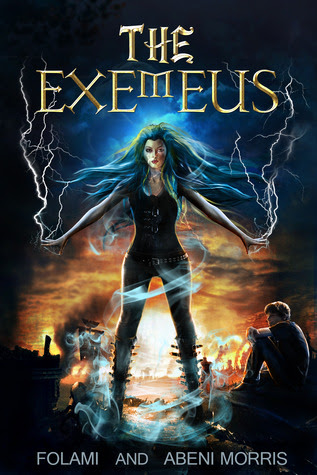 About The Exemeus:
Her short life was devoted to love and to hate. Love of the man who stole her heart, hate for the man who stole the world. Murdered by the government she swore to destroy, she's been given another chance to make it right. But to save the planet, she needs the help of the most powerful mystic the world has ever seen—unfortunately he hasn’t been born yet.

In a world where fear is the only currency, Dephon has committed the ultimate crime: inspiring hope.

His only goal is to make it safely through ninth grade, but on a post-apocalyptic Earth run by the Treptonian government, it isn’t that simple. Heir to a legendary power, Dephon Johnson is the only threat to the government’s rule. And on Trepton, all threats must be eliminated. When hundreds of assassins are dispatched to neutralize him, Dephon is forced to fight back. His only chance of survival is to enlist the aid of the greatest warrior the world has ever known. The only problem is, she's been dead for 13 years.

About the authors:
Folami and Abeni Morris are a sister-sister writing team. Together they wrote (and rewrote) The Exemeus, somehow managing to accomplish it without murdering one another. Despite their facial similarities, tendency to finish each other’s thoughts and stick up for each other constantly, no, they’re not twins and thus deserve their own individual bio.
Folami Morris:
Folami grew up in the tiny city of , where nothing ever happens and no one ever leaves. She went to for undergraduate, getting her B.A in physics and her B.S in Biology. After graduation she returned to , to live in an even smaller city, where even less happens, Antioch Ca. During this time she escaped the monotony by hanging out with her imaginary friends Hyalee and Dephon, and by writing the Exemeus. She finally escaped to Queens NY and now realizes that quiet and tiny aren’t so bad.
Abeni Morris:
As luck (and logic) would have it, Abeni grew up in the same tiny little town as her sister, then she too escaped to the tinier town of . She has yet to leave. She received her bachelor’s degree in early childhood development from . She is the mom of two amazing kids, who swear that they deserve a percentage of the book proceeds and a ton of the credit. At least she raised dreamers.
Find the book: Amazon | GoodReads
Find the authors: Website

MY REVIEW:
People. I have been dying to let you know about this book.  And now the day is here! YAY!

The Exemeus is dystopian but also fantasy. I felt it was told in a 'fantasy' sort of way. Where perhaps some crazy things happen but it is okay, it makes sense, and its expected because it is fantasy.

Dephon is your typical non-descript nerd always struggling to hide from the football team. His world, is anything but typical. His world is a future Earth now controlled by the Treptonian Army. School is illegal and held in the sewers. No one goes out on the streets unless they want to be shot. Nothing interesting has ever happened to Dephon.

Enter in mind-reading, future-seeing Jacquelin. She rapidly changes Dephon's life, telling him he has to read a giant magical book called an Exemeus and that doing so will save his life, and the world.

This story is about Dephon, but really...it's about Hyalee. As the reader, we get to experience the Exemeus. The Exemeus is a magic book that captures all the thoughts of Hyalee. Thus we get to read the story of Hyalee and Singleton, Dephon's parents, as well. Most of this novel is about Hyalee, with bits of Dephon thrown in, ala Princess Bride.

However, I thought all the characters were great. Dephon was funny, especially when interacting with Mallea who is the guardian of the Exemeus with an attitude. Hyalee was a great main character, though I wish she would have been more inquisitive about what was happening to her. For example, when Mallea starts coming into her powers her appearance changes daily. If I fell asleep a white person and woke up Asian? I think I would be asking just a few questions. Still, she was strong and brave. Her relationship with Singleton was adorable!

My cons? I felt like the authors were asking for a lot of blind faith from their readers. Hyalee never gets answers, so we the readers never get answers. Then it begins to feel like the authors just don't know how to answer the questions themselves so they avoided the questions. I have read a few books like this lately so it was really noticeable to me. Second, a lot of people complain about the length. Not me!! But as I think back over the story, nothing really happened. Hyalee and Singleton experienced a lifetime, but Dephon....not so much. As a result the novel felt like one, long, albeit exciting, backstory.I am expecting a lot more action in book two.

I rated this book a 4, but could easily be persuaded to go 4.5. Okay...you convinced me. Official rating: 4.5 stars. This is one story that has stuck with me since reading it. I am super excited for book two, The Azemeon. Recommend for fans of dystopian and fantasy, people who like stories about stories, and cool people :D

Make sure to check out The Exemeus Scavenger Hunt, where you can win a Kindle Fire or $150!  The first stop is at My Guilty Obsession, where you can get the first clues on this incredible journey for an amazing prize!  The Scavenger Hunt starts on Monday, August 26th and runs through Friday August 30th.  Chances to win are through midnight on September 1st.  Buy your copy of The Exemeus today, if you haven't already!