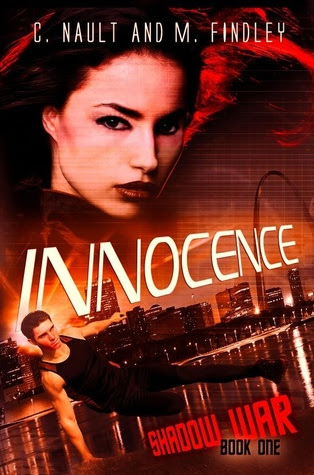 
Rachel Flanagan was dead.
Dead the day she kissed her sexy Parkour instructor, Adam Black. Dead the moment she stumbled upon his darkest secret. And it was only the beginning of her troubles. Now, she finds herself a key player in a world of rival secret societies, trained assassins, ancient alien technology, and a shadow war that has spanned centuries.
Rachel Flanagan might be dead to the rest of the world, but as Rachel Munro, she lives on.

My thoughts:
Innocence was a refreshing read for me. Rachel Flanagan falls for her sexy parkour instructor (never read about parkour before!) Adam Black. Things go horribly wrong one night when the two are attacked in Adam's apartment. Rachel watches in horror as Adam ruthlessly kills the six intruders without breaking a sweat. Suddenly, she needs to decide to live hidden away by an organization simply called the Order for the rest of her life, or be killed for witnessing so much.

The story has a wonderful, slow, natural progression. I think I've been reading too many books that rush about willy nilly without explaining things well enough. While there does have to be an air of mystery for the reader to want to continue, things are explained well enough to easily comprehend when the truth is finally revealed.

The mystery, intrigue, and suspense were a perfect blend. The authors really did a smashing job of giving us a enough of a backstory for Adam without dragging it out or retelling it too often. We also got just the right amount of POV switching between Rachel, Adam, and even the 'villain' Mark.

There is a love story, but in Innocence it is natural and more apart of the background. Rachel and Adam were attracted to each other instantly, but not in a crazy I'd-die-without-you-even-though-we-met-yesterday kind of way. They also took several weeks before hanging out one on one *gasp!*.

I had two hangups with this novel:
1. language and adult situations. The adult situations were contained to the first few chapters and not entirely graphic. I do wonder how much of this will continue in the rest of the series.

2. This was the larger upset for me: for much of the middle of the novel, Rachel comes off as a bumbling, annoying idiot who frequently gets in Adam's way. Even though I know her reactions fit in with her tough situation, it made it really hard for me to want to identify with her, and ultimately, root for her. Adam was the 'true' MC for me and I loved reading his parts:: MORE ADAM! :)

Innocence was really the best 'smaller published' ebook I have read in a long time. It did contain very minor spelling and word errors, but nothing worth truly noting. The Shadow Wars is a newer book, so it doesn't have many reviews on Amazon or Goodreads yet. Still, I hope you consider my recommendation and give this one a shot. It may not have been something I would have picked up on my own, but I am so glad I got a chance to read it!! Five stars from me!!

**Read an interview with the authors on Shelf Addiction**

Let me know if you read Innocence! I would love to know your thoughts!