And All the Stars Review 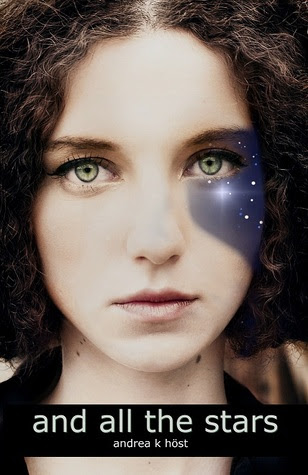 And All The Stars by Andrea K Host
Goodreads summary:


Come for the apocalypse. Stay for cupcakes. Die for love. Madeleine Cost is working to become the youngest person ever to win the Archibald Prize for portraiture. Her elusive cousin Tyler is the perfect subject: androgynous, beautiful, and famous. All she needs to do is pin him down for the sittings. None of her plans factored in the Spires: featureless, impossible, spearing into the hearts of cities across the world - and spraying clouds of sparkling dust into the wind. Is it an alien invasion? Germ warfare? They are questions everyone on Earth would like answered, but Madeleine has a more immediate problem. At Ground Zero of the Sydney Spire, beneath the collapsed ruin of St James Station, she must make it to the surface before she can hope to find out if the world is ending.

My Thoughts:
This book could have a lot of potential..if put in another author's hands. Oops, harsh. But it is true. The plot and idea of the book were definitely intriguing. However, I couldn't relate to any of the characters.

We are thrown into the middle of a crazy situation with Madeleine, who is so detached and distant from her dangerous situation that I felt detached and distant from her. Not sure I know of anyone who would lie to their mother after being in a catastrophic accident. Or who would easily accept the presence of aliens without seeing a shred of evidence that what happened was anything other than a bombing. Eventually she stumbles into Noi and they become insta-friends, even though Madeleine professes she has never had a friend a day in her life. Beyond Noi, Madeleine quickly comes into possession of several insta-friends, who are all teens, who all appear to have no family to care for them (another great example of the non-existent parents phenomenon in YA lit), who all appear to be waaay too smart, and who all can, of course, save the world.

Then there is the love interest. I honestly didn't even know Fischer was on Madeleine's love radar until they were engaging in adult situations pretty much. I was really thinking this was going to be an awkward novel where Madeleine struggled with her inappropriate feelings for her cousin Tyler. Why? Because the author used more adoring descriptions and invoked more feelings in Madeleine for Tyler than Fischer. The whole book. There was some good love dialogue, but by then it felt forced and contrived by the author and not originating from the characters.

Lastly: I wonder why Madeleine was even the main character. Whenever there was major action, she would pass out, be drugged, or....pass out. The big climax was incredibly short lived and she...passed out. Again. She never added much to the conversation or decisions made by the group. Basically she was the most Blue person, was briefly wanted by the enemy, made love to a boy I didn't even know she liked that much, sketched a lot, passed out, snuggled her cousin, and then passed out. Oops. That's all probably a spoiler. I would have much preferred to have followed Noi or even Fischer!

Barely 1 star from me. Sorry author lady :( And while I wouldn't recommend it to anyone, apparently plenty of other people enjoyed this book. Make sure to read other Goodread reviews and decide for yourself.

If you do decide to read And All the Stars, come back and let me know your thoughts!