I usually post these on the weekends, but I am hoping you were out and about enjoying the Fourth and not reading blog posts! But it is a new week now ;)

What the crap happened to June?? Gone in a flash. Most of the month I felt pretty crappy which put a huge damper on all reading and blogging. My motivation completely vanished. Luckily, I had left myself pretty open book schedule-wise as I was anticipating a lot of INSPY reading and discussion. This last week of June however, the whole family has had a cold and I find myself wildly behind on reading and blogging.

In June I got bookish mail left and right and was absolutely LOVING it! Anything better than bookish mail?? I think not. 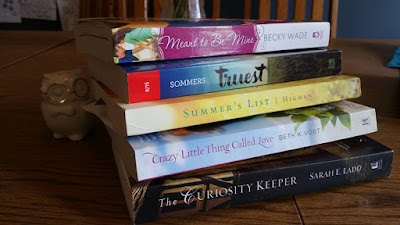 Hubby had his birthday at the beginning of the month, which is always a blast. We also celebrated our 6th anniversary. Hubby actually worked, but he bought me the BEST roses and we went hiking that weekend. Then there was Father's Day in which I totally failed per usual. And Hubby has been working on this deck building project forEVAH. It'll get done next summer...

Yeah...this is going to be the sad part. Last month I talked about a steady decline. Well...it continued in a drastic way.

We finished Parks and Rec and have found ourselves in a pit of depression. PIT (see what I did there??). We've restarted Doctor Who and just finished season two on the 30th. Yes, we STILL cried. Every time people, every time.

I also started The 100 on Netflix. I saw some people talking about it on Twitter and went out on a limb. Its not the BEST show out there, but it sure has a lot of drama!

Food seemed to be a major theme. Most importantly THIS and THESE.

And as ever kid things. Baby Girl loved 'Going on a Bear Hunt' so this seemed appropriate.

And that was my June folks. I hope July slows down and I can at least be present for most of the days. Also, HAPPY FOURTH OF JULY!!!