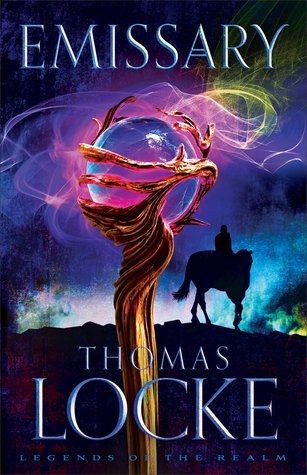 Hyam is a likeable lad who will make a fine farmer someday. But he carries a burden few can fathom. As his mother slips toward death, she implores him to return to Long Hall, where he spent five years as an apprentice. It was there that Hyam's extraordinary capacity for mastering languages came to light--and soon cast him into the shadows of suspicion. How could any human learn the forbidden tongues with such ease? When Hyam dares to seek out the Mistress of the Sorceries, her revelation tears his world asunder.
He has no choice but to set out on the foreboding path--which beckons him to either his destiny or his doom. An encounter with an enchanting stranger reminds him that he is part hero and part captive. As Hyam struggles to interpret the omens and symbols, he is swept up by a great current of possibilities--and dangers.

I received a copy of this book from the publisher in exchange for an honest review. All opinions are my own. Buy a copy today!

My Thoughts:
'Emissary' is one of those books where I just have to say 'It had SO much potential'. I know it is cliche and so many in the book world will roll their eyes at me, but it is a perfect fit here. For a book that is 384 pages, this one is much too short.

'Emissary' is a high, epic fantasy novel, and it reads like a textbook. Our MC, Hyam, is the perfect 'hero' character. He is an orphan, has no place to call home, starts out friendless, is self-sacrificing, the perfect gentleman, intelligent, quickly rises to the call....you name it, Hyam has it. It is also pretty dry. Little to no emotions or feeling discussed or noted. This combination of perfection plus lack of feeling made it incredibly hard to connect with Hyam or even believe he was a real person.

Flat out? There was just not enough detail. **POSSIBLE SPOILER AHEAD!!** Hyam's 'relationship' with Hyam came completely out of left field. They would be having a normal conversations and then suddenly the author mentions something that tried to make the conversation sound like flirting. It just wasn't. And then WHAM BLAMOO! They are getting hitched??  Wha?!?! I didn't even know Hyam THOUGHT of her, much less loved her! **END POSSIBLE SPOILER**

For all my mini-ranting, Locke can write very well. He weaves a high fantasy that reads very much like Tolkien. I love his inclusion of mages and a new race called the Ashtanga. It also contains the 'usual' like elves, humans, knights, kingdoms, and evil v. good. If you are looking for a new high fantasy series, than this one is perfect for you!

For all it's lack of emotion, 'Emissary' makes up for it in the adventure category. Daring escapes, intense battles, the high seas....all bases covered! These things quickly make up for the lack of depth, enough so for me to give it a solid 3 stars. If I see book two around, I will probably pick it up.